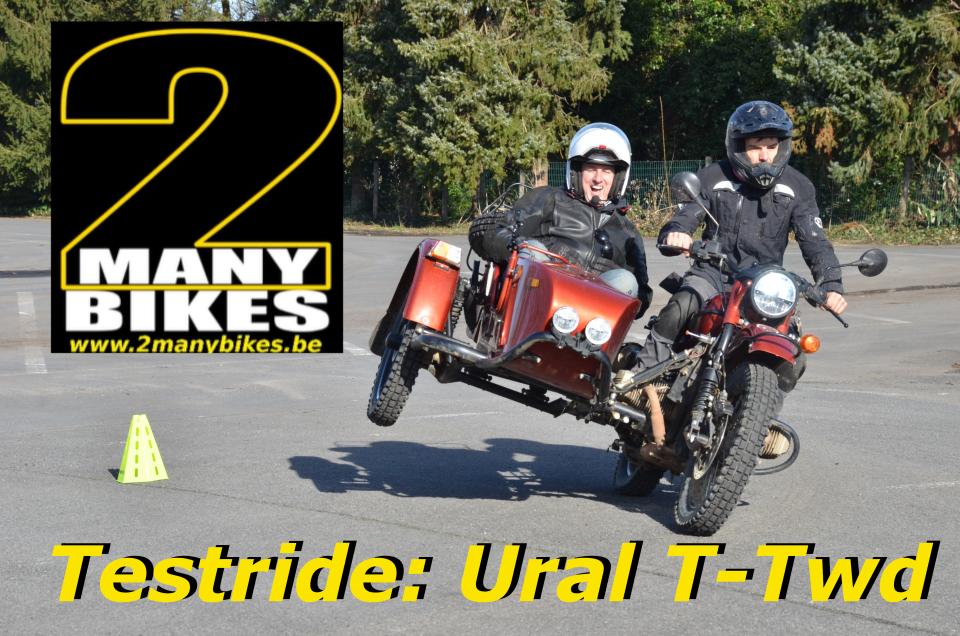 Call it Ural, because the name IMZ dates back to the communist era. Because everything used to be better, retro is hot now. And you can't find it more retro than with the Russian brand.
Together with importer Peter, we briefly set out with the Ural Ranger sidecar combination. 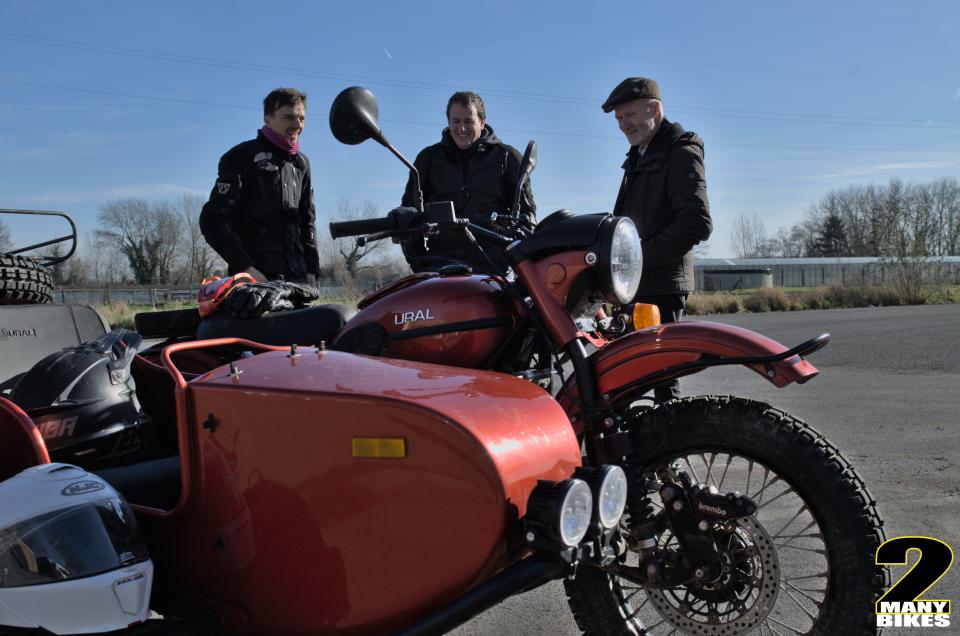 Where many Russian brands such as Dnepr have gone under, Ural has survived the transition to capitalism.
Ural's history is as eventful as that of its homeland. On the eve of WWII, Soviet engineers were looking for a versatile and reliable means of transport to use in mobilization for warfare against the Germans.
They copied the successful BMW R71 and renamed it M72.
The M72 was built in a factory in Moscow, but when the Germans advanced in 1941, production was moved to an important trading center in the Urals called Irbit.
The sidecars played an important role in defeating the Nazis and after the war, the tricycles were gladly used by the poor Soviet population.
In 1950 the thirtieth copy rolled off the production line. From 1953, many copies were also exported worldwide, and the sidecars gained a loyal following.
From the 1960s the factory in Irbit focused exclusively on the production of models for the civilian market under the name Irbit Motorcycle Works or IMZ for short. After the dissolution of the Soviet Union, however, Ural went steeply downhill, not least because the local market was flooded with cheap second-hand cars from the West.
Like many others, the state-owned company was then sold to the private market and narrowly escaped complete destruction. It was current CEO Ilya Khait who bought the company when the conglomerate he worked for as an engineer lost all interest.
There has been a positive evolution since 2000. 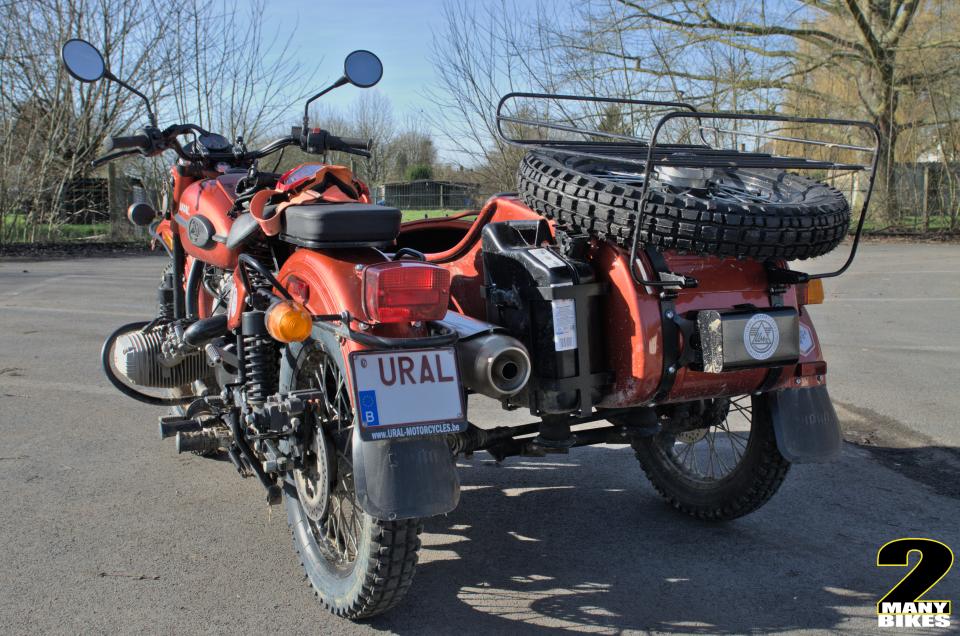 New Urals are just okay, no more, but no less than that. That also applies to the finish, but in comparison with the own past. An Ural deliberately still looks the same as it did during WWII, but inside it has become more modern year after year.
New Urals are not perverted marketer's dreams, but technically evolved descendants of the originals and genetically 100 percent authentic.
Despite the presence of a starter motor, you can still revive them with a kick starter. 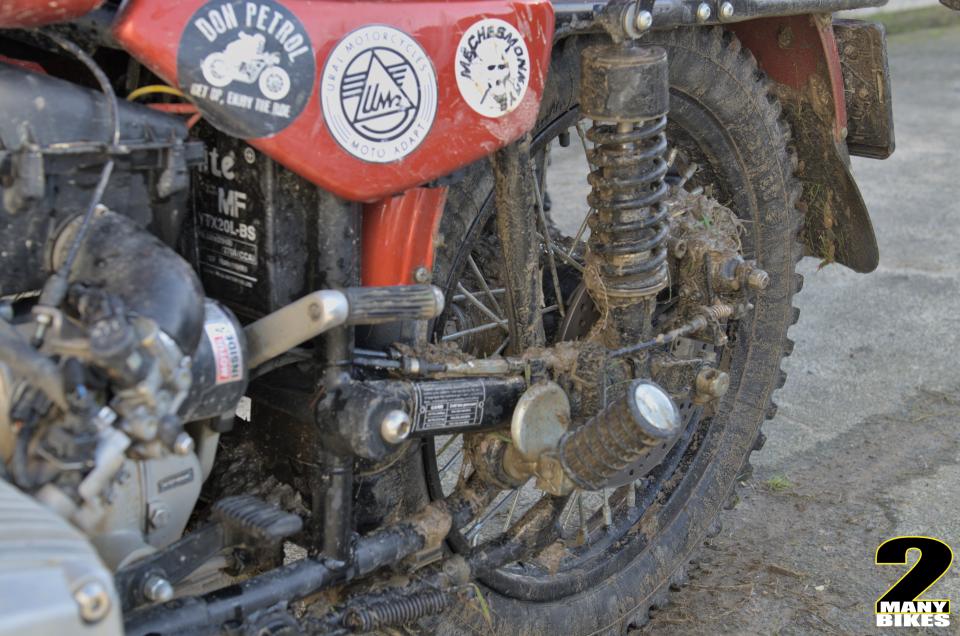 Today Ural uses a classic two-valve boxer engine of 745cc that produces a modest power of 41 hp and a torque of 55 Nm.
It has fuel injection, the current EURO5 emission standards make injection indispensable, but the cooling is still done by air. The maximum speed would be 105 km/h, but we did not get there.
A four-speed gearbox plus reverse and shaft drive, traction on the wheel of the sidecar is also ensured by engaging a connecting shaft.
The gearbox shifts short and dry with a heel-toe pedal.
The 19-inch wheels fit knobby Heidenau K37s. 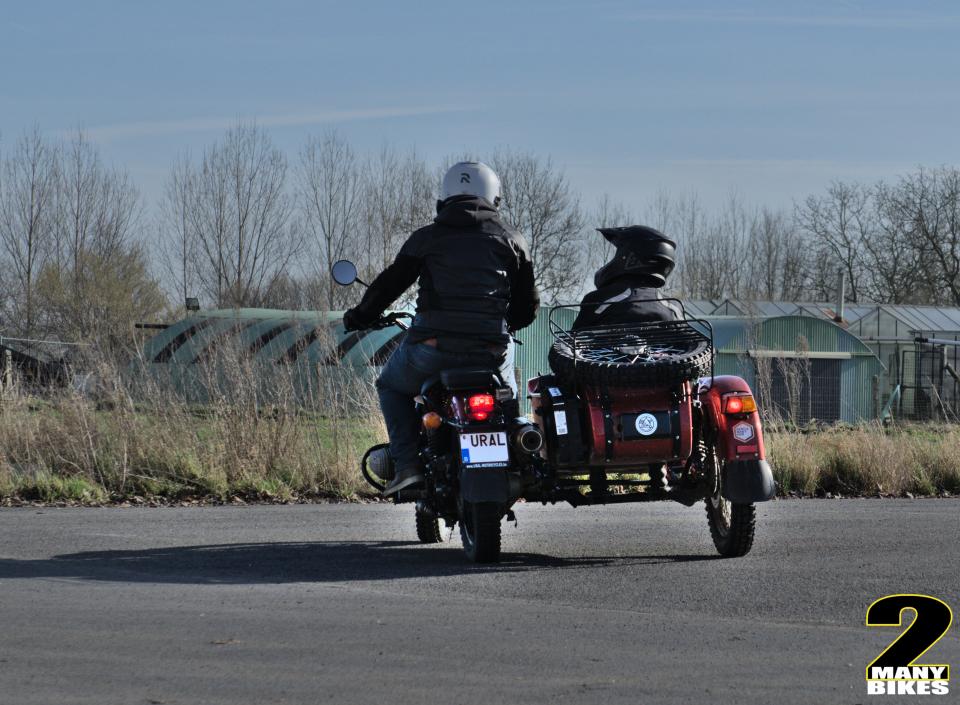 Machine parts are improved year after year, and while everything used to be made in-house, about 75 percent of parts are now sourced from suppliers.
For example, the modern Brembo brake calipers.
The swing arm front fork is specially designed to work in a sidecar combination. 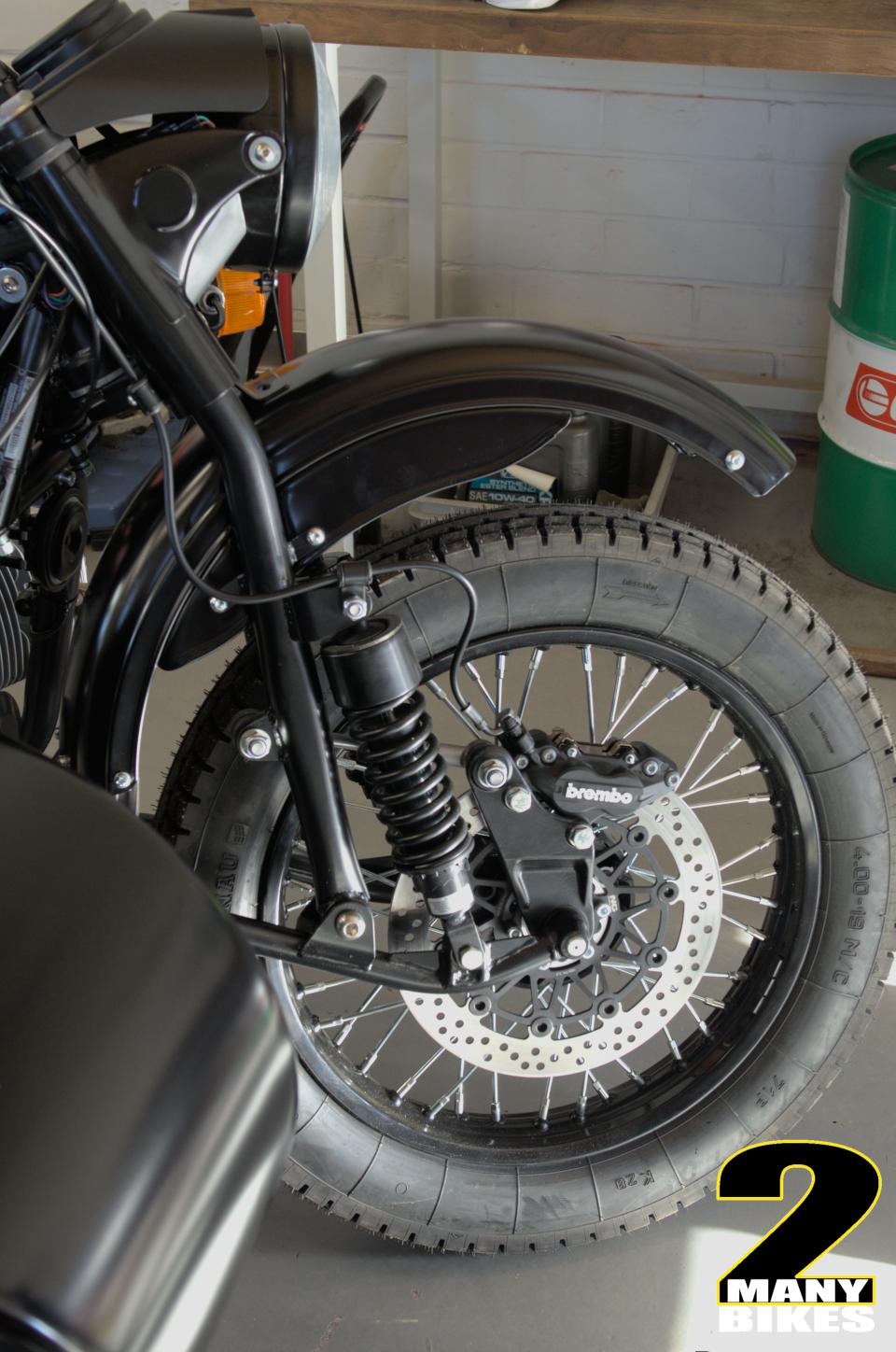 The flat twin is surprisingly lively and responds to throttle commands with a wakeful hum. From the floating saddle you look out over a motorcycle landscape that could have date from 1950. Only the instrument clusters at the handlebars are more modern, think 1980, that's modern enough. 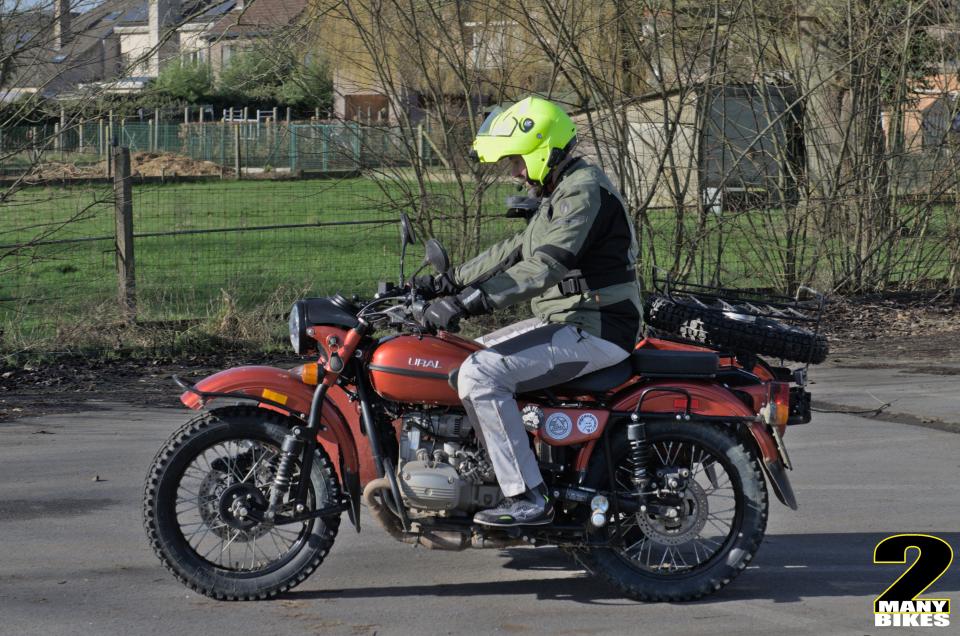 An Ural is made for back roads, or off-road, for slowing down. A cruising speed between 80 and 90 km/h is realistic enough in the current traffic situation. You are pleasantly lively or just leisurely strolling along the way. But where you are really convinced is off-road, thanks to the lock, so that the two-wheel drive can be engaged.
There is a choice between four forward and one reverse gears, plus a driven sidecar wheel.
But then the Ural is also a kind of three-wheeled Jeep with it. 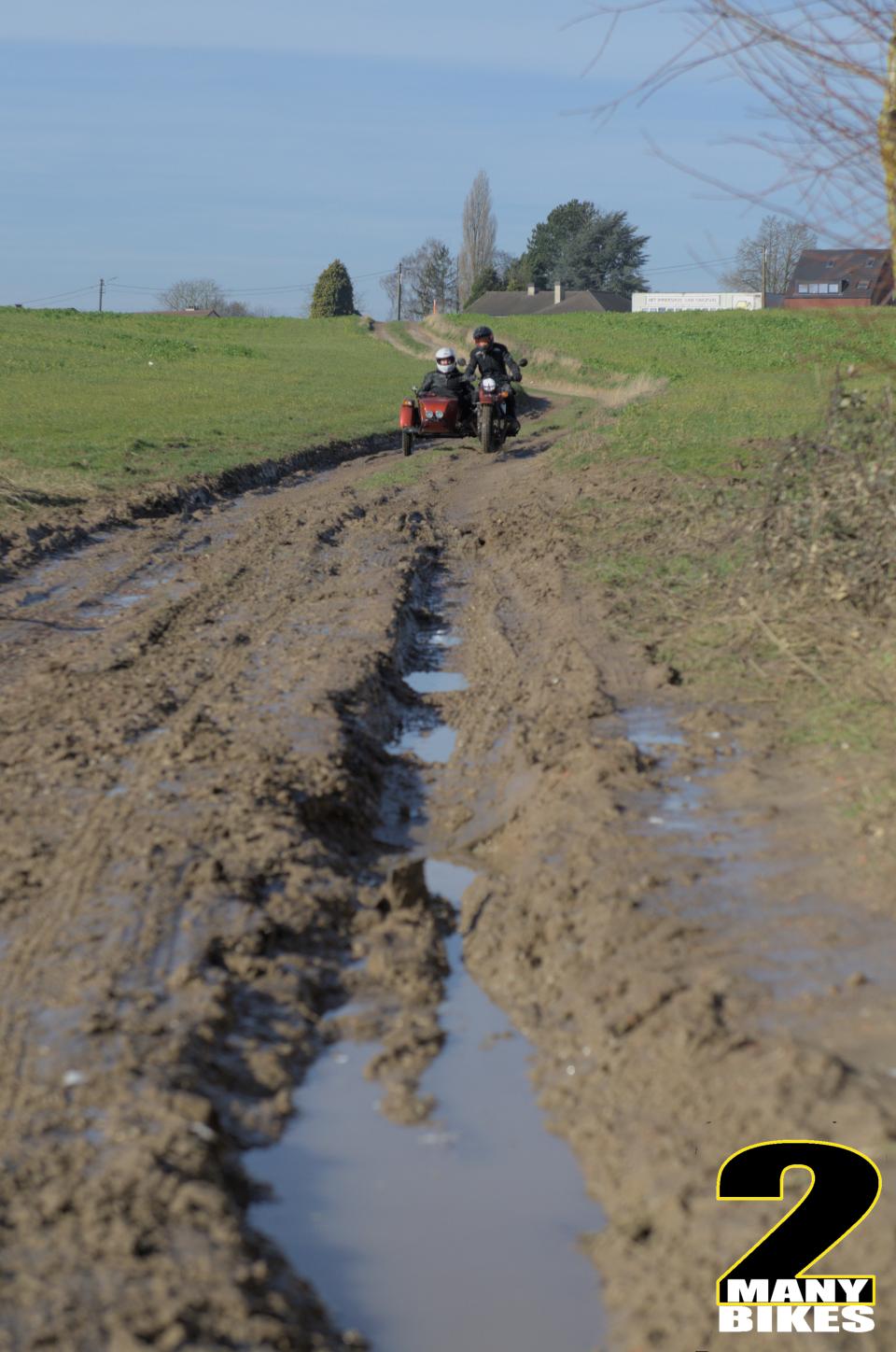 When the weather is good and you are not in a hurry, such a Ural is a unique means of travel, which I would be happy to pick up a few times a year for a short trip or a weekend in my own region.
Making big trips with the Ural is certainly possible, with extra luggage in the sidecar. You can transport a maximum of 635 kilograms with the Ranger, a property that it undoubtedly owes to its war history. Or if you take a travel companion with you, the experience of traveling with a sidecar is therefore unique, for everyone involved who can look around and enjoy it without any obstacles in front of them. Allow extra time to get somewhere, because if you stop at a red light or to fill the 19 liter tank, you are guaranteed to lose time with interested parties who want to chat. Each and every one of them falls like flies for the presence of a sturdy, nostalgic tricycle. The smiles and admiring looks you get are unique. Everyone has an opinion about this bike, and everyone wants to take a seat in the cart. At Ural, they call this the URL - the Ural Delay Factor. 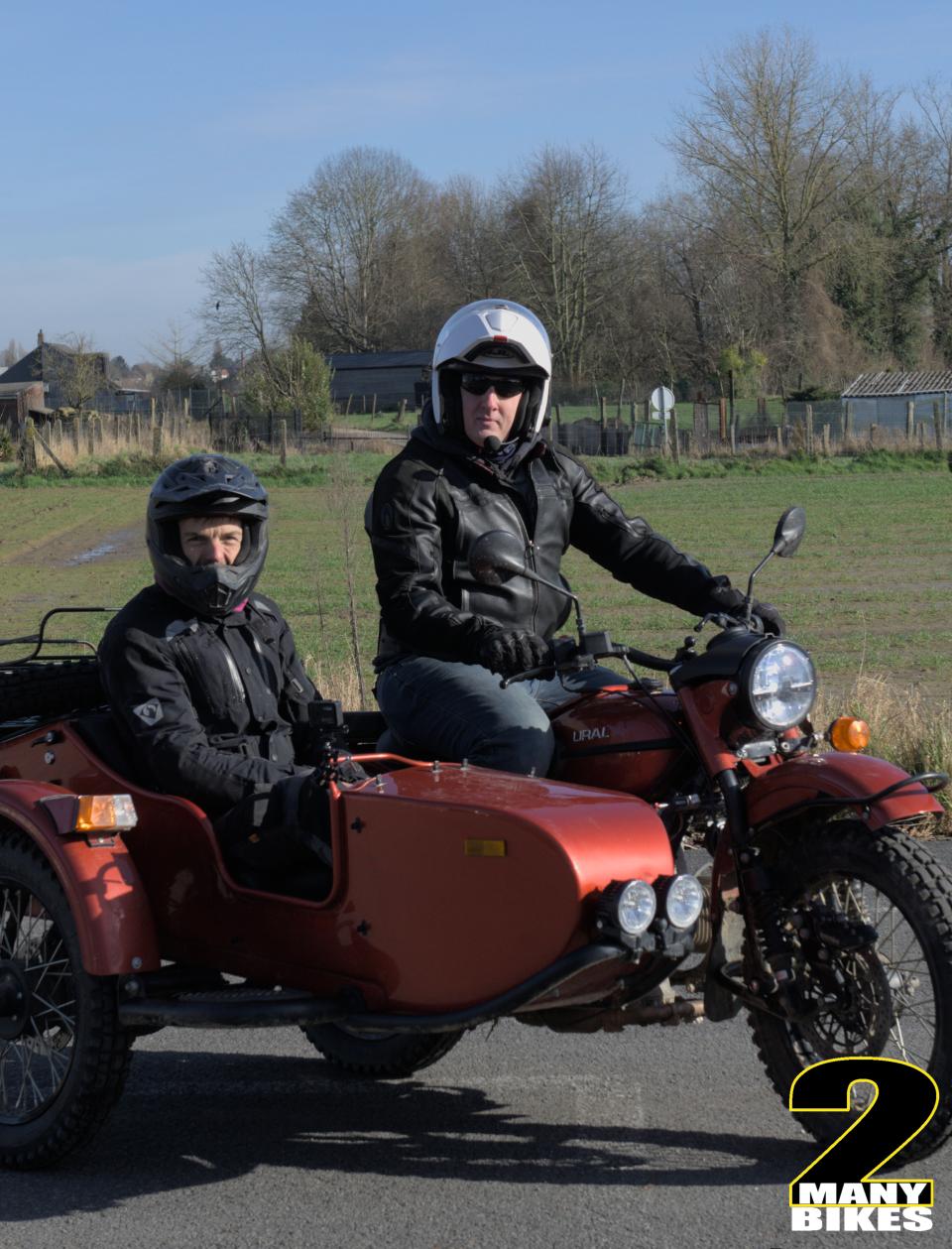 Belgian importer Peter Carels invited 2manybikes for an instructive instruction, because riding with a sidecar is completely different from riding on 2 wheels.
On a normal motorcycle you steer according to the known procedure: briefly push one handlebar half, tilt in, keep in line with the body and accelerate out.
So you should not try that with a sidecar, here you just have to pull/push the front wheel in the right direction and keep doing that until the end of the bend.
This is of course because the motorcycle does not tilt due to the sidecar hanging next to it. Moreover, the sidecar also has a sensitive effect on cornering behavior.
The drive is only on the rear wheel of the motorcycle itself, the wheel under the passenger just follows.
But if you start a turn to the left, the outer wheel will move faster and the sidecar wants to overtake the engine.
You can use that to make a turn shorter. If you close the throttle, the sidecar pushes the whole acceleration in the right direction.
It all feels very old school and unpolished, but also very solid and charming. In a world of quickshifters and adaptive cruise control, this is still real physical driving, and that gives a surprisingly liberating satisfaction. 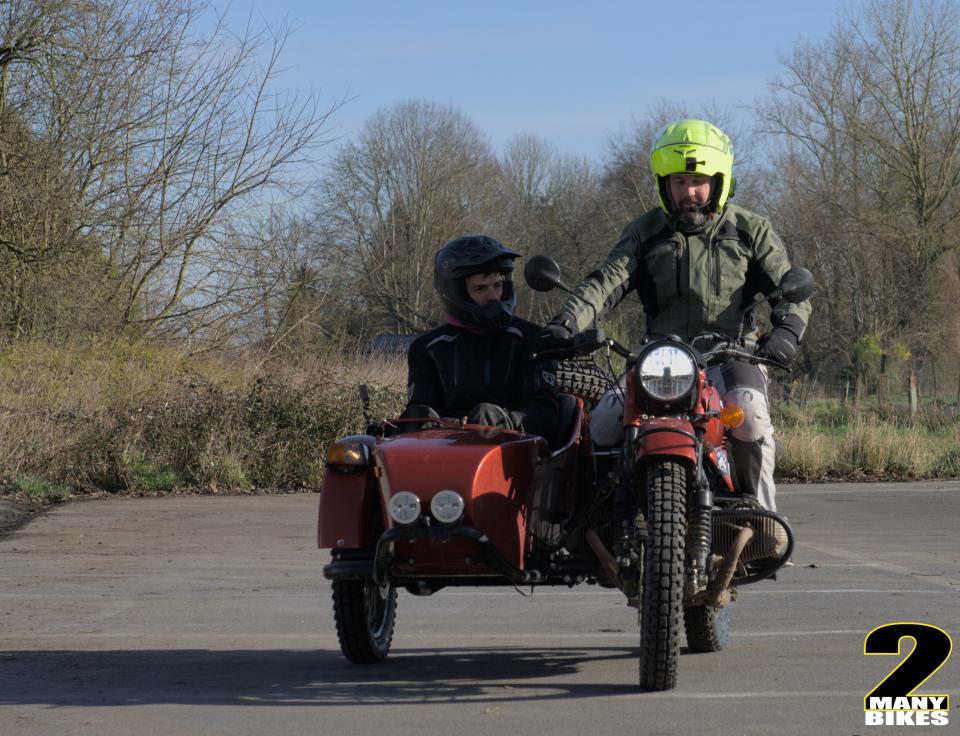 At a bend to the right you have to give it a little more gas to push the bike past the sidecar.
That makes a right turn a lot more difficult and physically heavier. But it's mainly the mental game, where you have to throw everything between your ears and your muscle memory overboard.
Driving the Ural quickly gets used to and it does its job with little subtlety but forcefulness. 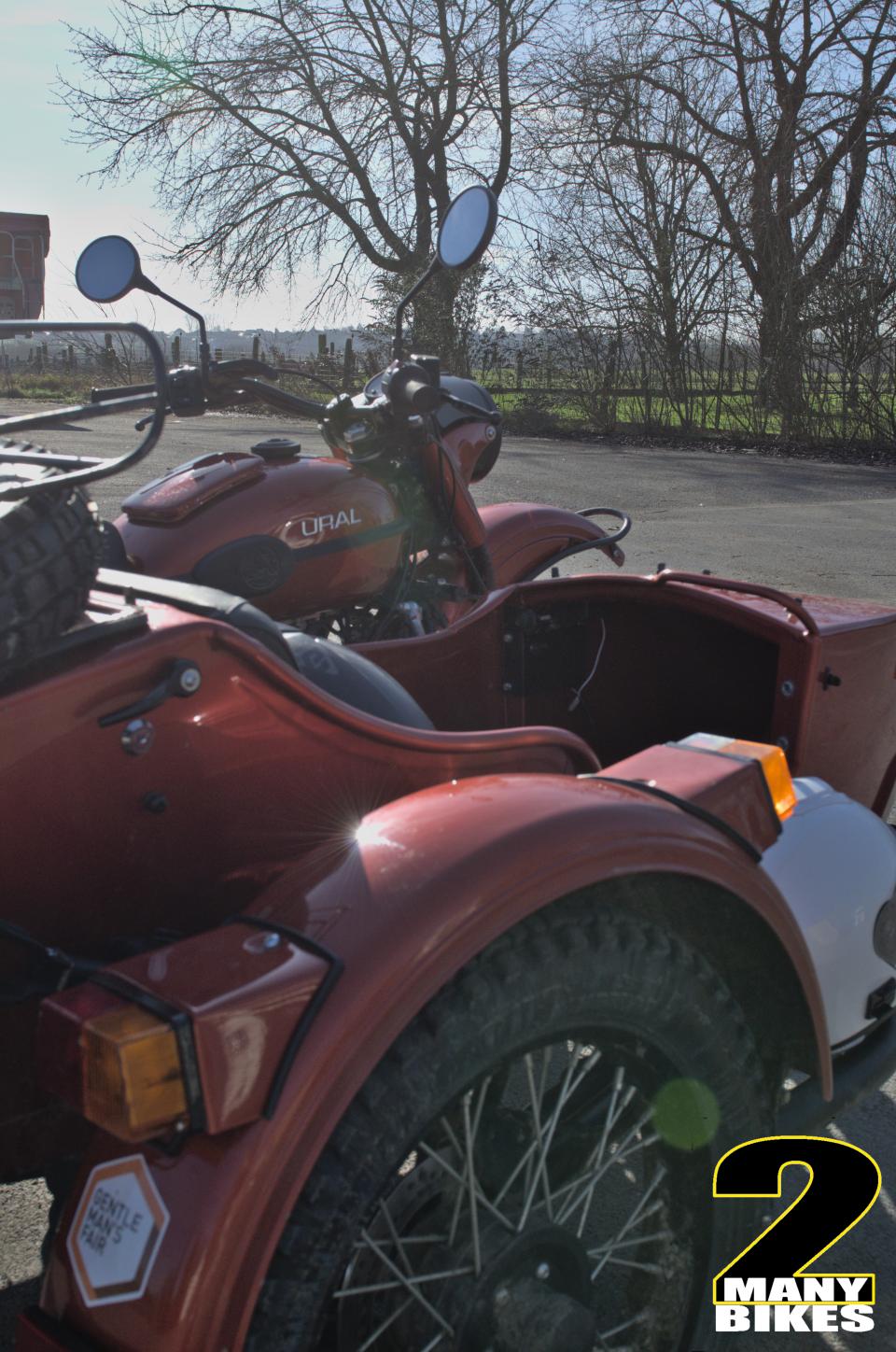 Peter took us to a quiet parking lot to explain everything clearly and calmly.
As first advice - never be in a hurry - does not suit the character of the tricycles. Quickly merging between oncoming traffic, quickly crossing the road, all taboo. A calm driving style, smooth and in full control, that's what it comes down to. After getting into the sidecar as a passenger, it soon becomes clear that it does indeed react completely differently than a traditional motorcycle.
The rear tires skids over the asphalt at every turn, almost pulling the tire of the rims. Like a lorry does, especially when taking tight turns. Peter is so dexterous with the Ural that the 3rd wheel takes to the skies - something that is also learned. Not to impress the female sex, but rather to feel and control the sensation of the lifting third wheel, so that there is no panic if it takes to the skies unintentionally.
After the passenger ride we are also allowed to get in the driver seat and Peter crawls into the sidecar. The first few turns give us an alien feeling, on a left turn even the knee of the tank comes looking for the ground... but after some basic instructions from Peter everything runs smoothly, the speed is increased slightly and confidence grows. Seatbelts are not present and mandatory for the passenger, although these have a huge influence on the handling of the Ural, if you shift your weight to the front of the sidecar, the rear wheel can also take to the air, a very undesirable maneuver.

After our initiation on the dry asphalt of the parking lot, Peter wants to take a ride with us in the natural habitat of the Ural - off road. And you can take this seriously - deep gullies filled with mud, usually almost impossible to plod through with a two-wheeler without cross tires are child's play with the Ural. If it gets too bad, there is still the switchable sidecar wheel, which makes the Ural a kind of three-wheeled Jeep. We were deeply impressed by the Ural's off-road capabilities, and Peter knew it. This makes the sales pitch much easier for him. 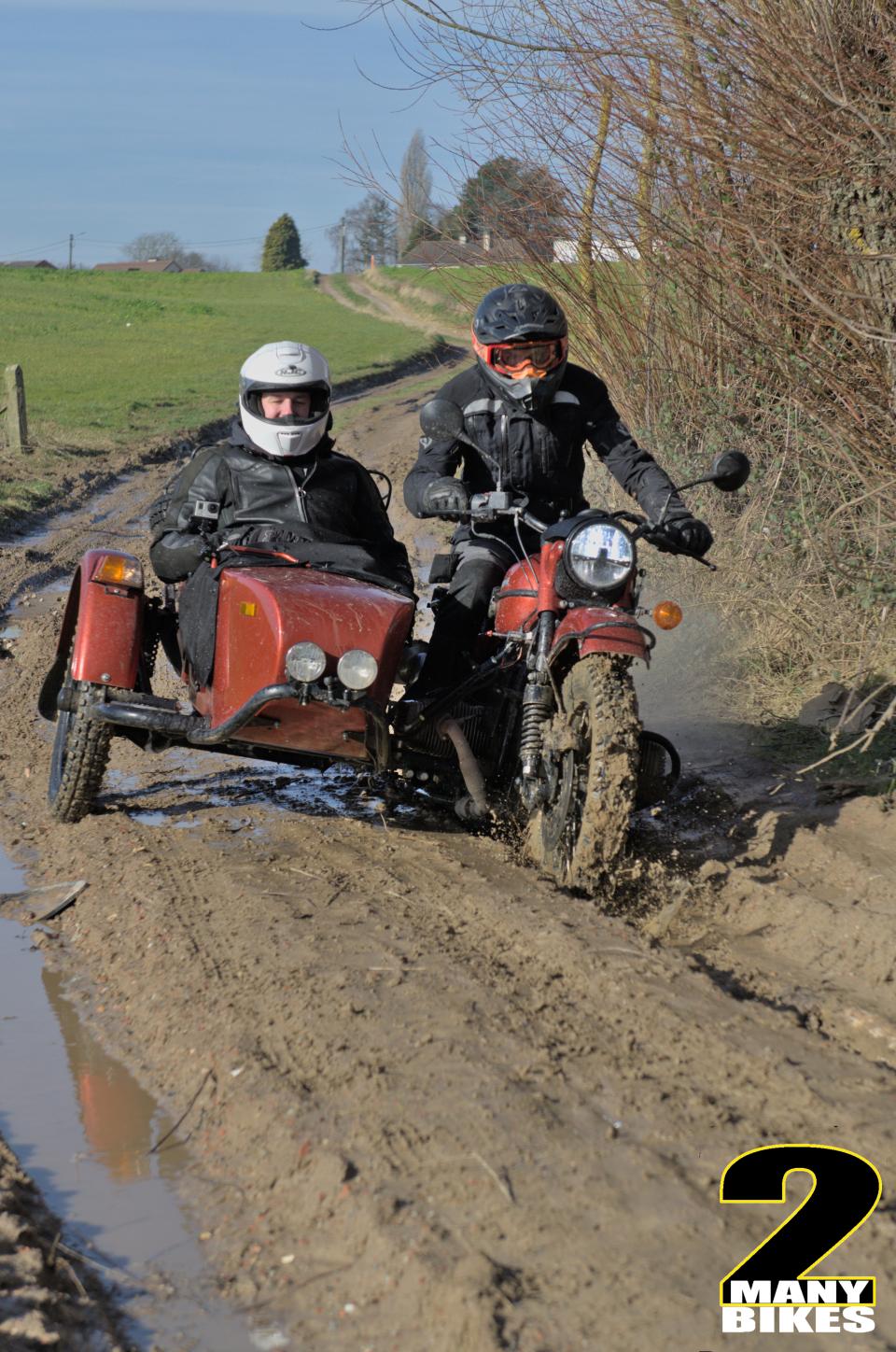 A new Ural is really no longer a cheap means of transport, but you do get something unique with mountains of character in its place.
Before purchasing an Ural tricycle, you should be aware of three things: firstly, that sidecar riding combines the disadvantages of driving with those of motorcycling.
Second, that you're riding a distinctly dated piece of engineering.
And third, you never get anywhere on time as an Ural rider. But slowing down in style has its price. 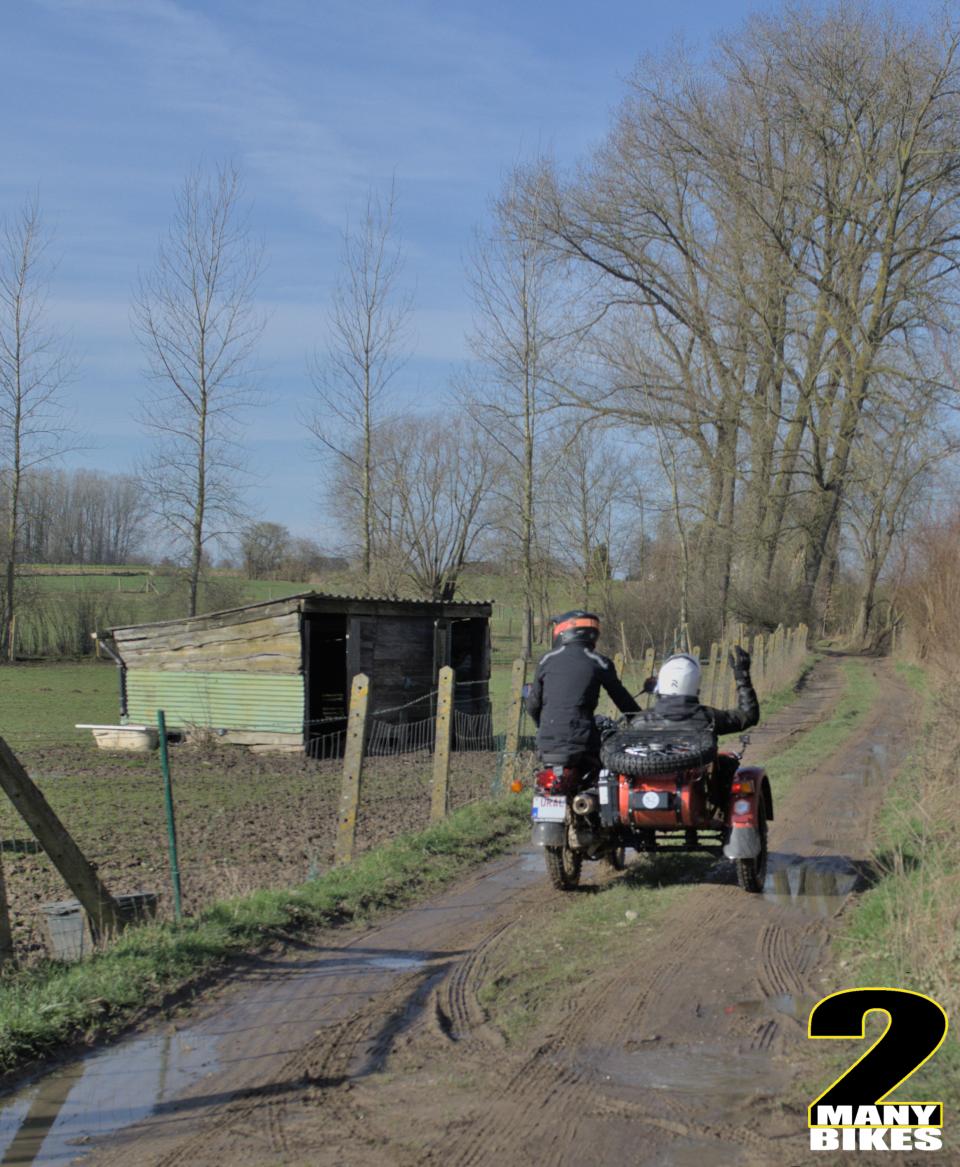